On Monday, August 19th, 2013 Amazon.com went down for approximately 40 minutes, resulting in an estimated $4.8 million loss in sales.This is based on an estimated $120,000 in revenue generated for every minute of the day.

Of course with that kind of sales volume, chances are customers will notice. And, boy did they. The observation was widely reported on social media. 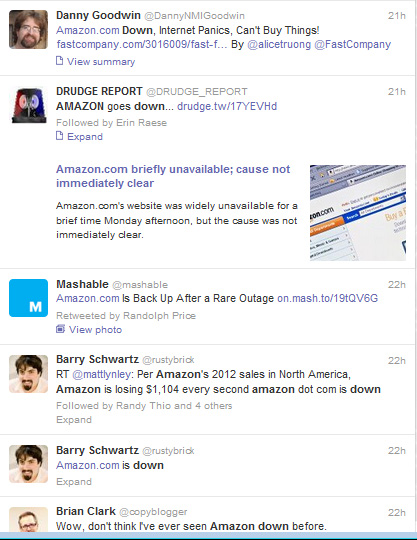 Amazon itself was not very visible in the stream of tweets about the site going down. Fast company, Business Insider, Mashable, as well as internet personalities Barry Schwartz, Brian Clark, Danny Goodwin (and yours truly) chimed in to share the news.

A Light-Hearted Alternative to the 404 Error Message

However, if one tried to visit Amazon.com during the outage, they were served up the following graphic, which revealed an apologetic, funny error message, in lieu of the traditional 404 error message.

The titles displayed with Amazon’s apology displayed books titled “I’m Sorry…My Bad!“, “Oops!” and “Grave Mistake“, which added a little levity to the situation. Although I am quite confident there was not much levity behind the scenes while Amazon attempted to identify the problem and recover the website to full functionality.