For those CEO’s unsure about whether social media could be useful to them, or their brand, Virgin CEO Richard Branson is living proof that social media is exactly where CEO’s should be. With 3.4 million followers on Twitter, Branson doesn’t just engage, he encourages followers to engage him directly. This is one CEO that understands the power of winning hearts and minds in building a brand.

Branson uses a promoted tweet, highlighted below,  which appears above all recent tweets, to make his invitation ever-present, visible at the top of the conversation for anyone viewing his profile. 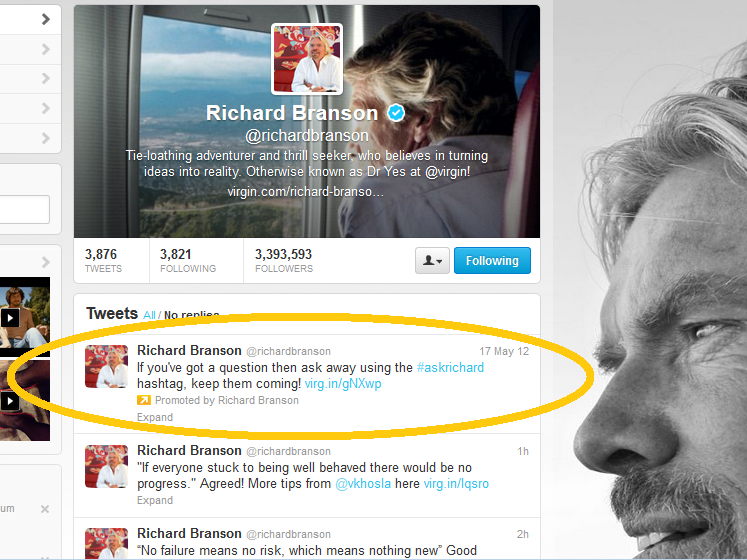 Social media has been recognized for its role in building brand, visibility, SEO, promotion and the coveted direct-connection to the customer. Despite this evidence, CEO’s have resisted the call to become more social in recent years. Has the tide begun to change?

How Many CEO’s Use Social Media?

A recent study conducted by CEO.com and Domo reveals that CEO’s are beginning to embrace social media. However, if we look to the Fortune 500 as representative of CEOs, a shocking 68% have absolutely no presence on social media.

Of course, not every platform is right for the executive, or the brand. Most will gravitate toward one platform or another. The top social media platforms have emerged as LinkedIn, Twitter, Facebook and Google+. In a one-year period, CEO participation on each of the top four social platforms has increased, even if nominally. 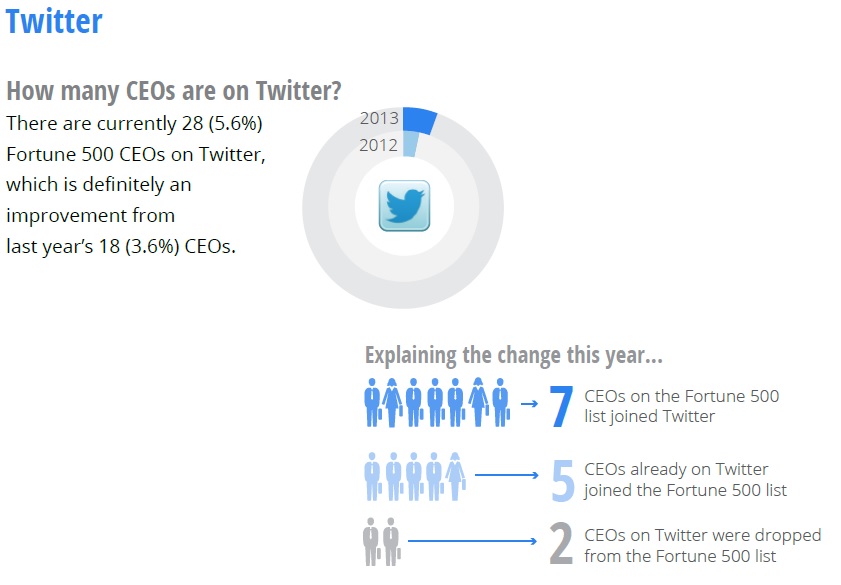 Many CEO’s with enormous followings may remain cautious, or unconvinced of the power of the social space. One of these personalities is Berkshire Hathaway CEO Warren Buffet who follows no one, has posted only three tweets and has over 500,000 followers who apparently hope for more from the executive.

28 percent (140) of Fortune 500 CEO’s have a LinkedIn Profile. The LinkedIn “Influencer” program has created followings for voices of CEO’s without the requirement of personal connections. On LinkedIn, Richard Branson attracts 2.2 million followers. Warren Buffet, who is not active in the program does not have followers. This differentiation defines how the reach of a brand can be greatly influenced by social conversation from the top.

5 Questions to Ask Before Your CEO Goes Social

Because the stakes are high, many CEO’s are intimidated by the social media space. After all, what is posted is permanently out there. However, with proper strategic perspective, social media can be a powerful tool for the CEO and the brand.

If the answer is yes to all five questions, your CEO should seriously consider social media as an additional channel to exercise their leadership in expanding the reach of the brand, one customer at a time.

If the answer is no, it is still important for a CEO to establish a presence. Rather than publishing, the focus may be to listen and learn from what is saying about the brand.