The Difference Between Popularity and Influence

Influence = power. While many seek to grow audiences, focusing on the aggregation of likes, followers, fans and friends; what really matters is influence that inspires audiences to take action. 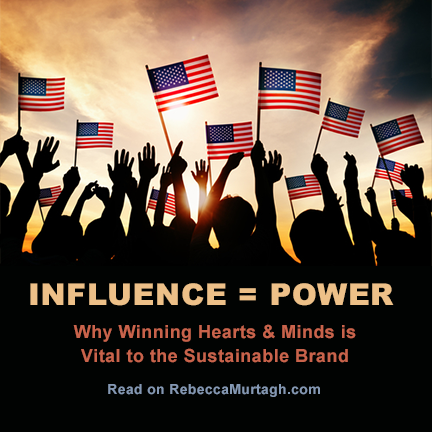 One of the most powerful illustrations of popularity and influence is about to play out in the 2016 Presidential election.

Campaign events held by Republican Candidate Donald Trump in his bid for the office of the President of the United States have been attended by large enthusiastic crowds at events complimented by large social media followings. Hillary Clinton has attracted much smaller crowds, yet her decades in politics have provided her name recognition and connections few candidates in U.S. history have enjoyed. Which will win the 2016 Presidential Election?

The significant difference between Popularity and Influence should give us an indication. However, in politics things are not always what they may seem.

The good news is that those of us outside politics can be winners if we focus on the fundamentals of Influence.

Lesson 1: Influence Is Not the Same as Popularity

In 2010, a study by Brian Solis revealed how differently audiences viewed popularity and influence.

A brand (whether it be a corporation or person) can become popular without being able to influence. Influence inspires action without direct control on that action…a vital tool to growing market share, and building a sustainable brand.

In the digital age where authority and influence being garnered by individuals and brands, influence yields more power than ever before.

This simple statement identifies how many believe the 2012 U.S. presidential campaign was won.

Leveraging the influence of Barack Obama’s message on individuals, and empowering them to influence friends, family, co-workers, etc. in their personal lives, (what I describe as ‘Spheres of Influence’ in my upcoming book), amplifying the investment in one, to reach many.

To inspire change, you must first inspire trust. It is absolutely imperative you have full mastery of who you are and what you stand for if you want to inspire others to trust. This is equally true for brands as it is for individuals.

Who you are
+  What you believe
=  Single sense of self

Because every organization is slightly unique, any brand can adapt this equation by being clear and firm about who they are, and consistently communicating core values and unique value proposition to carve a place in the world. This could offer explanation to why, despite being a self-proclaimed socialist, Bernie Sanders is attracting voters in the world’s most successful democracy, and why Donald Trump seems unscathed by unfiltered speech relating to his personal thoughts and opinions on individuals, policies and beliefs of others. Each of these candidates is unwavering in being true to their brand. They are UN-apologetically authentic. Conversely, authenticity and clear conviction of beliefs could be viewed as a reasons why Hillary Clinton has struggled with Trust (demonstrated by honest and trustworthy polls) 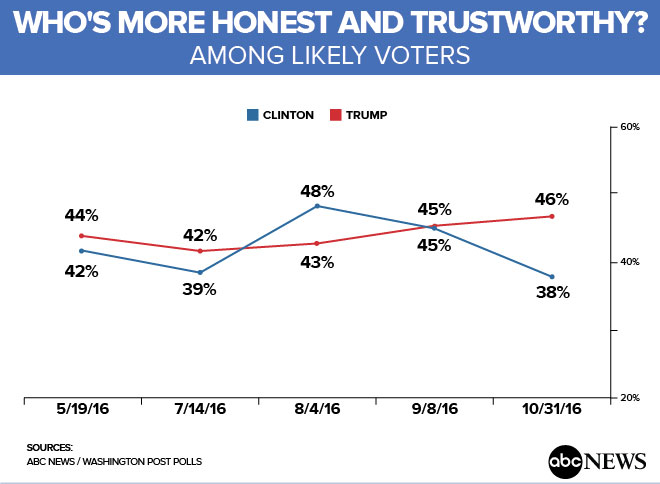 The same may be said of people and brands outside the political spectrum. Steve Jobs, known for being driven and difficult to work for, was known to be brutally honest. He strongly believed in his vision, which won the hearts, minds and loyalty of customers for decades. He has influenced the brand, its customers and investors, long after his untimely death.

Lesson 4: Influence is The Product of Earned Media

Nothing has changed the dialogue and relationship between brands and their audiences like the Internet and Social Media. Unlike the mass-media, broadcast method of the pre-Internet communication, where messages where rarely personal; today’s digital landscape has created a rich, although complex, dynamic landscape to directly aggregate and activate audiences for just about any cause.

The shift from channels where messaging was disseminated to networks that contribute in the dissemination of messaging is illustrated very well in this simple graphic shared by Michael Slaby: 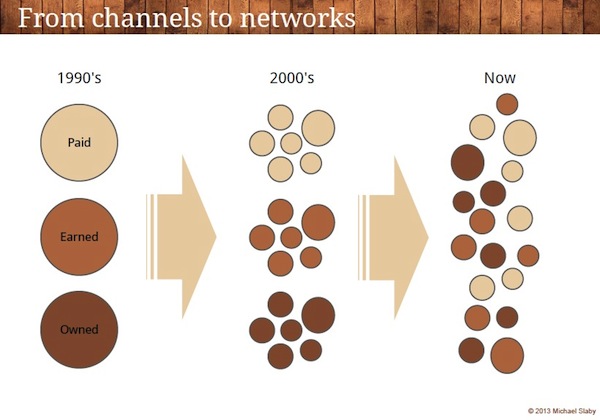 Lesson 5: Don’t Be Afraid of Change

The competitive landscape in which any brand operates changes every day. Those who innovate will succeed. Those who fail to keep up will fail. “Adapt or Die” is the cornerstone of brand sustainability.

Capitalization of the conflict between old and new ways of thinking can be very productive. It is not only the choice between old vs new. It is often the tension between who we are and who we want to be that brings an organization to life – and resonates with those needed to make it all happen. Internal and external audiences have equal voice when it comes to the evolution of a brand. Customers, employees, competitors, media, industry experts and investors all play a role in advancing, or destroying, the evolution of the brand.

Lesson 5: You Are Only In Control of Part of the Message

The value of an integrated marketing strategy that leverages peer-to-peer and traditional marketing campaigns throughout the product life cycle increased the impact of the message exponentially.

A video published by a brand is “owned media”. Yet, it is the “earned media” represented by shares, comments, likes, etc., that extends the message from broadcast channels to infiltrate personal networks.

Lesson 6: Build Influence From an Audience of One

One of the most overlooked facts by businesses and brands seeking to grow market share is that success is dependent upon the winning of each individual.

Only when a brand (whether it represents a corporation or one individual) understands the power of networks and ‘Spheres of Influence’, will they be successful in today’s digital, social economy. Earning the trust of one can create access to the many that each individual has influence over.

Marketing to individuals was a cornerstone of the Obama Presidential election campaigns. The successful cultivation and management of more than 300 million registered voters with a focus on distributing unique, personalized messages and a user experience would yield unprecedented results in the 2008 campaign, and subsequently adapted for the 2012 campaign.

Not every brand has millions to invest in such an undertaking. Fortunately, the abundance of simple tools and customer relationship management (CRM) programs making message personalization and engagement accessible to brands of any size.

Lesson 7: Winning Strategy is Never About You

Influence must be driven by vision with an intended outcome. When specific goals that resonate with audiences are articulated clearly, action comes naturally once trust and support have been won.

The 2008 Obama Presidential campaign was molded around principles of community organizing. Messaging was strategically focused to convey an “its about you” sentiment to voters, according to Slaby. The emphasis on connecting with voters on the issues that meant the most to them was the cornerstone of the political campaign that included millions of personal interactions. This had never been done before. And, may not have been done since at this level.

Today’s social landscape has created an environment inherently capable of supporting such an endeavor. Still, many brands still default to mass-communication and broadcasting that does little to connect with the needs and potential of each individual.

When the brand approaches the conversation from the perspective of its audiences, the context is more relevant.

Lesson 8: Listen Before You Speak

Successful entrepreneurs, salespeople and leaders understand the value of listening. One of the most powerful ways for communication to break through the clutter is to make it personal. This means much more than adding a recipient’s name to an email. It requires an investment at a personal level. Time invested is rewarded with a truly personal connection that will result in loyalty far faster than mass media messaging.

The Obama campaign did just that.

Each of 2.2 million volunteers were empowered to engage in 150 million conversations with individual voters. The campaign used technology to enable volunteers to “listen” to conversations to find out what was important to potential voters. They were then able to  customize communication and inspire action at an enormous scale with consistency and efficiency.

Slaby has explained how the campaign deliberately created a valuable experience for long-time supporters, empowering them to “teach” new members to the community, while addressing the motivating factors that inspired the very first interaction of each member uniquely appropriate to an introductory exchange. Slaby said we must “honor people’s experiences. … It is our job to connect the dots on the back end.” This is where technology makes all the difference.

Lesson 9: Technology Makes All the Difference

Technology is only as good as the results it delivers.

The NORWHAL platform was created by the Obama campaign to execute the integrated campaign strategy. Said to have been run more like a startup than a political campaign, the platform was designed to support each and every aspect of the strategic vision. In addition to collecting and leveraging mammoth amounts of data, the technology had to serve the needs of the users, without interfering with inspired action to influence others to vote. In other words, tools that work and are user-friendly is vital to any organization being able to win hearts and minds.

Data is how each and every aspect of a brand’s influence is measured. Every aspect of a campaign to grow market share, regardless of industry, depends on metrics that identify core audiences, target communications that are relevant, measure the reach each and every engagement and aggregate it all under one umbrella. Data is the most effective tool available to guide efforts, maximize on wins, and seize opportunities as they arise.

Scott VanDenPlas, head of the Obama technology team’s DevOps group, expressed the power of the technology built to sustain the campaign in a Twitter Update that outlined the system designed and deployed to support 10k requests per second, 2,000 nodes, 3 datacenters, 180TB and 8.5 billion requests. 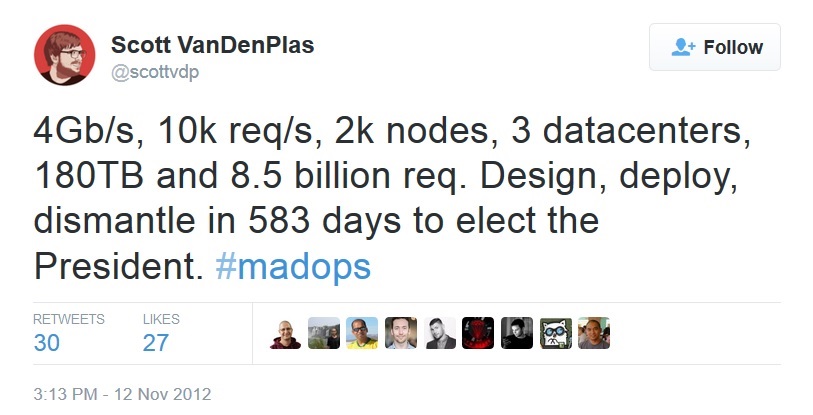 The data and reports created from this campaign would be any data scientist’s dream to explore. 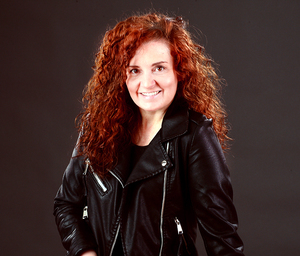 Rebecca is on a mission to empower professionals, entrepreneurs, executives, and their teams with scientifically-proven methods that enable them to innovate, achieve goals faster, and create sustainable success!

Contact Rebecca today to explore how you can future-proof your career or business!